Shelving the Elf on the Shelf

According to Wikipedia “The Elf on the Shelf: A Christmas Tradition is a 2005 children’s picture book… The book tells a Christmas-themed story, written in rhyme, that explains how Santa Claus knows who is naughty and who is nice, and describes elves visiting children between Thanksgiving and Christmas Eve, after which they return to the North Pole until the next holiday season. The Elf on the Shelf comes in a keepsake box that features a hardbound picture book and a small soft toy in the form of a pixie scout elf.” 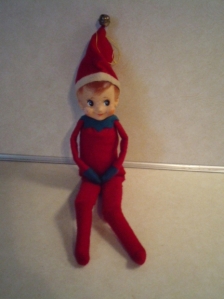 Seems harmless enough. But let’s look at both the home-wrecking and the inspirational aspects of this little creature. For many, the Elf on the Shelf is just plain creepy (he’s naughty and manipulative). He is a little spy for Santa, and spies, even great spies like Philip Seymour Hoffman in his swan song, A Most Wanted Man, are a little creepy. We don’t always know or understand their intentions, which are not always good.

Matt Pelc writes in HuffpostParents about a villainous invader in “How the Elf on the Shelf Ruined Our Christmas” (you can read it here). “The elf is always watching” has a creepy Orwellian Big Brother feel to it. The modern equivalent might be The Capitol spying on our favorite characters in the Hunger Games (as much as we love Donald Sutherland, President Snow is not exactly the quintessence of holiday spirit). Yahoo News calls the Elf on the Shelf  “the greatest fraud ever pulled on children” (here).

And certainly if you look with the perspective of caring parents trying to rear their children in today’s society, the thought of using Big Brother or President Snow in the guise of a plastic toy does not bode well for the next generation of parents – or kids. For many,  permanently shelving the Elf on the Shelf might be a good idea.

But in terms of inspiring young minds and nurturing the holiday spirit of wonder, the Elf of the Shelf is a winner. The game of hiding the elf is fun, it inspires creativity and maybe even good behavior, if you’re lucky. But we trolled the Internet for good things about the Elf, and  found all kinds of compromising images of…well, this article is G-rated, so let’s just switch to the Polar Express shall we?

The Polar Express is an award-winning children’s book written in 1985 by Chris Van Allsburg. It is the story of a doubting young boy, who embarks on a journey of self-discovery (to the North Pole, of course) and finds that the beauty and wonder of life never fade for those who believe. This message of belief seems somehow preferable to the Big Brother thing.